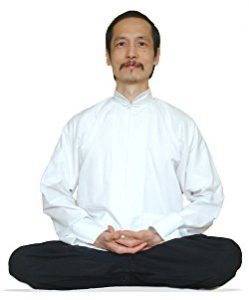 Sifu Charles Chan started learning this style after reading about it in a magazine, but apparently, although it was a popular style, it was very difficult to find someone to teach it as most of the masters remained within their own provinces.

Fortunately, Sifu Charles Chan found a teacher Sifu Cheung Wing Fai, who was open-minded about teaching ‘outsiders’. Sifu Cheung Wing Fai accepted Charles as his student and so his training began. After over five years of training and a minimum six hours a day with his Sifu, Charles mastered the art and moved to England.

Sifu Charles says about the history of the style as was taught to him…. The whole style is based on kicking (which is very unusual for a Southern style of Kung Fu as the old saying goes ‘Kicks to the North, Hands to the South’) and was developed especially for a midget who practiced in the Shaolin Temple. The Grand Master who taught him decided that because of the man’s lack of height, he needed to use more kicking techniques, simply because he just couldn’t reach his opponent. Thus the style was conceived.

After perfecting it the man went to Tong Kwun district and as he hadn’t given his style a name it was called just Shaolin. When the man made his name well known after successfully defeating over 500 boxers from several villages, the people knew him as Mok Ching Gill, his name became distorted into Mok Ka – which means Mok’s family.

Sifu Charles Chan is the founder and Chairman of UK Shaolin Mo Ja Kung Fu Association. He has been teaching Shaolin Hard Style Kung Fu, Taiji, Qi Gong and meditation in the United Kingdom since 1973. He is one of the earliest executive members/technical advisers of the British Kung Fu Council (now known as the British Council of Chinese Martial Arts – BCCMA).

Sifu Charles also has a website taoway.co.uk which is based on spirituality, positive living and alternative healing arts.

It was with great sadness that I learned that Master Charles Chan had passed away.

I had known him from the early seventies.

He was a great teacher who became a good friend.

I learned so much from him and my life has been enriched by my experiences with him.

My current students have commented that they felt that they knew him through the training and experiences that they have had with me, as I always refer back to how I was taught. I have tried to give them what I myself experienced.

My thoughts are with his family and friends.

His teachings will continue to provide fulfilling experiences for existing and future students of our style.